skip to main | skip to sidebar

Just back from a wonderful trip to the Russian cosmodrome in Baikonur, Kazakhstan, to see the launch of a Eutelsat telecommunications satellite, W2A, on a Russian Proton rocket on 3 April 2009.

While there we -- one British journalist (me) and three French, plus customers and executives of the satellite company from around Europe -- went on a tour of the vast cosmodrome, about the size of the Netherlands, and saw the pad from which Yuri Gagarin was blasted off in 1961 and the space museum, including the Soviet space shuttle, which made one unmanned flight before the project was abandoned in the 1980s.

Here's a camel just outside Baikonur town. I've posted more pictures from Baikonur at http://picasaweb.google.co.uk/alanburkittgray/BaikonurCosmodrome34April2009?feat=directlink
Posted by Alan Burkitt-Gray at 10:27 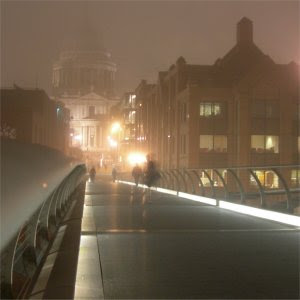 London tonight: St Paul's Cathedral just visible through the fog from the Millennium Bridge
Posted by Alan Burkitt-Gray at 21:54

See Joan's website, featuring a selection of her watercolours. Click on the image or go to www.joanburkittgray.com

The BGs on the Thames

All the family just after waking up on the narrowboat Speckled Hen, moored on the River Thames opposite Hampton Court Palace, on 27 July 2006. We'd moored the previous night by Windsor Castle, having started above Oxford the previous Saturday. Later the same day we went through Teddington Lock into the tidal Thames and then turned into the Grand Union Canal in Brentford to loop back - over two more weeks - to Oxford